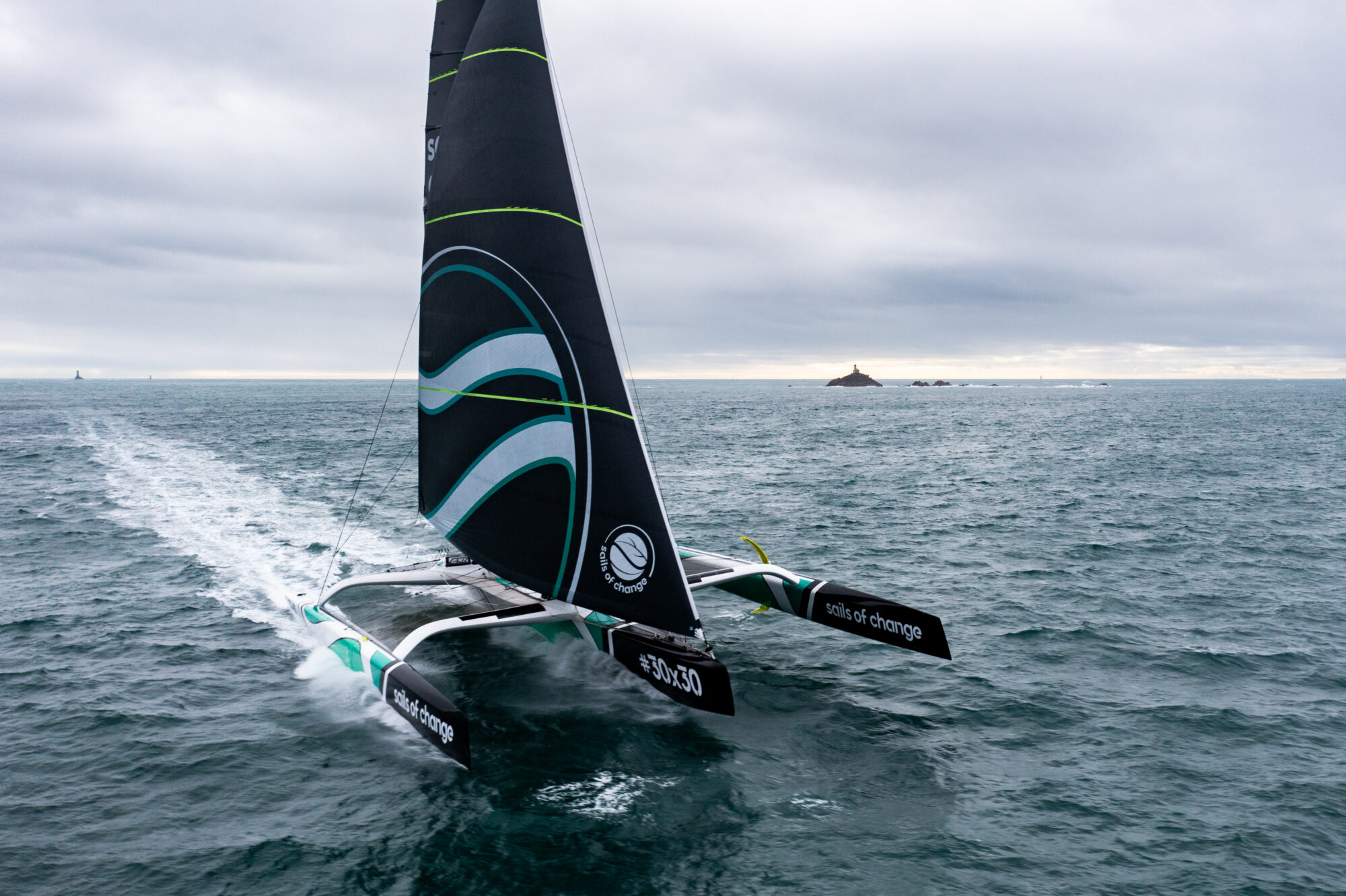 Around the world record attempt : the Maxi-trimaran Sails of Change arrives in Brest and remains on stand-by

The Maxi-trimaran Sails of Change, on stand-by since October 24, 2022, for a new attempt on the round the world sailing race, the Jules Verne Trophy, arrived in Brest today. The delivery trip from La Trinité-sur-Mer went smoothly in a moderate southerly wind. Now based near Ushant, the boat and crew are waiting for a favourable weather window that will allow them to reach the Cape of Good Hope in around twelve days.

Yann Guichard and his crew have attempted this record three times: in 2015 (47 days, 10 hours, and 59 minutes) with Dona Bertarelli, who became the fastest woman around the world, in 2018, and in 2019 when they were forced to retire due to rudder damage just past the Kerguelen archipelago. The Jules Verne Trophy record was further reduced in  2017 when IDEC Sport completed the circumnavigation of the globe in 40 days 23 hours 30 minutes and 30 seconds. The round-the-world record has become increasingly difficult to improve on with each successive attempt (over thirty in less than thirty years!): Early attempts started in the North Atlantic in a storm. Nowadays, it is thought to be better to ride on the back of a high-pressure system. Back in 2010, the aim was to reach the equator in less than a week, whereas today, the objective is to reach the Cape of Good  Hope in around twelve days!

A LAP OF THE PLANET IN STAGES

The course is made up of stages, the shortest possible direct route is a minimum of 21,600 nautical miles, but no sailing boat can follow this because of the prevailing winds. First you must cross the Atlantic from North to South across the equator, the first milestone of the Around the World (Jules Verne Trophy). To reach the Cape of Good Hope in less than twelve days means setting off in a Northerly wind, linking up with the Portuguese trade winds, and crossing the dividing line between the two hemispheres in less than five and a half day. Following that you need to round the St. Helena High and transition from a South Easterly to a North Easterly before reaching the Roaring Forties in the Southern Ocean. Then you head into the Indian Ocean. An optimal Atlantic passage is key to breaking the record. Sails of Change (ex-Spindrift 2) already holds the best time between Ushant and the equator achieved on the third attempt at the beginning of 2019 (4 days, 20 hours, and 07 minutes). But it is the sequence of events in the South Atlantic that will determine whether the reference time at the Cape of Good Hope can be achieved to enter the Indian Ocean ahead of the record. It will then take around six days to reach southern Tasmania, and another eight days to reach Cape Horn.

Once there, it’s far from over! The team must then sail north up the Atlantic Ocean, preferably along the Argentinean coast (which can take at least a week), and across the equator for a final sprint to Ushant (around six days). If you add up the various best times achieved per stage, it totals 38 days, 16 hours, 36 minutes. Therefore, the decision of when to start is pivotal.

A SPECIAL KIND OF LOGIC

“IDEC had some pretty brilliant conditions in the Indian Ocean and on the way up the Atlantic. So, we must have a lead when we reach the Cape of Good Hope because it will be hard to make up time elsewhere. There is a way to gain time on the southbound Atlantic stage and during the Pacific crossing, but that’s it. So, we must improve on the times that have been set by going down to South Africa and the Pacific faster. For the rest, to achieve the same times as the record holder would be quite good. For the moment and for the next few days until mid-November, there is no weather window for a start, because the trade winds are weak or non-existent and the Southerly wind is set over Western Europe”; said Jean-Yves Bernot, shore-based router for Sails of Change.

“There are no openings for now in the North Atlantic because the trade winds are not really settled : we have to be patient. Remember that IDEC left quite late! And it’s preferable to be on stand-by in Brest because we gain about half a day of weather forecasting”; added Benjamin Schwartz, navigator on Sails of Change.